With oatmeal – Can you believe it?

I’ve been drinking lots of smoothies lately. More so than I ever thought I would. I think I know what changed and evolved to drinking them on a regular basis –

The Nutribullet is plugged in and ready to go at all times.
The container in which I blend rests right on top when not in use.

This Nutribullet has been an evolution and now I’m really starting to dig it because it’s easy, healthy and actually tastes good. I started with banana, pineapple, milk and a couple cubes of ice. Easy enough right? Then one day I bought a pack of frozen strawberries. Frozen works better for me because I don’t feel pressured to use them or they’ll go bad. After using the strawberries I thought I would switch it up and try blueberries. One day I threw my cold oatmeal in and couldn’t believe how yummy it was!

Then I found this and knew I could make it, drink it and like it! 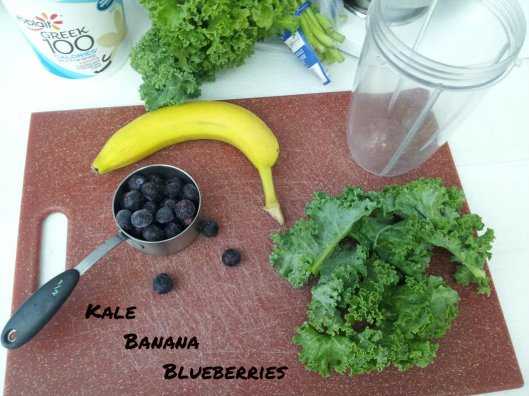 All ingredients to my Nutribullet and blend until smooth, about 2-3 minutes.

Had I seen this recipe a few years ago I probably would not have given it a second look. It would not have been appealing to me at all! However, a couple weeks ago I made some kale chips and they were pretty darn good. Even my husband agreed and I call him Willy Wonka so that’s saying something! I’m excited for this whole new world of smoothies that has opened up for me!