The The Catrinka Project is a message of hope for employment and education for women and young girls through fashion. This project was started by three friends in New York City – Megan, Amisha and Sumana. Their mission is amazing – it employs and empowers woman to make handbags with local textile traditions from around the world. Then 50% of the profits go towards educating and removing barriers between girls and education, which is one of the most effective ways to reduce poverty. To share this message the below canvas tote will go to a lucky winner and these beautiful women picked a perfect day to do it – Mother’s Day.

In honor of mothers all around the world The Catrinka Project is giving away a canvas tote to a lucky follower – and the rules are easy-peasy – simply leave a comment here then pay a visit to The Catrinka Project Facebook Page and give them a “like.” You will then be able to see all the beautiful handbags come out of this amazing project! The tote above was made for Girl Rising, a girl’s education documentary film and the purpose of this film was to hopefully ignite support to all young girls around the world in their education. The text on the bag says “The Girl From [City] Can Change The World”, this is a reference to each city from each of the girls in the film in each of their native languages (Gujarati, Amharic, Krio, Khmer, French Creole, Spanish, Arabic, etc.) and the bag is stamped with the image of one of those girls with a block print texture. 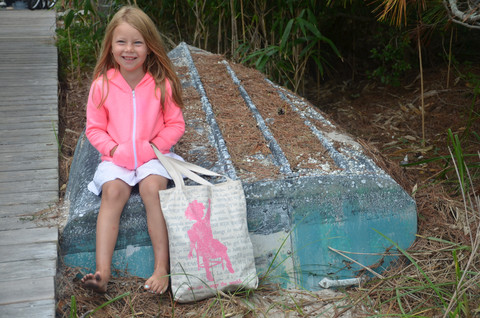 * The Catrinka Project Giveaway goes from May 2 – May 11

* Winner will be announced and notified on Mother’s Day!

* Winner will be picked at random

This post is brought to you by The Catrinka Project